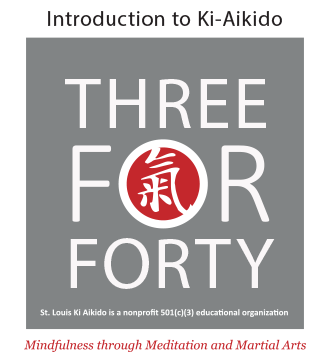 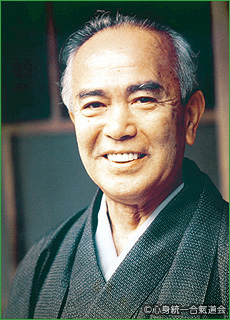 Koichi Tohei was born in Tokyo in 1920. When he was very young, his family moved to Tochigi prefecture where he spent his childhood. Tohei's health was fragile throughout hischildhood and he frequently was in hospitals and under the care of doctors.

At his father's insistence he took up judo. Having strengthened his body to some degree, at fifteen he earned his black belt and at sixteen entered Keio University's preparatory program. He continued to practice judo enthusiastically, but contracted pleurisy as a result of excessive training and was forced to withdraw from school for a year. Doctors told him he could never do vigorous training again without risking death. Tohei began reading extensively about religion and eastern philosophy and decided to begin practicing the things he was reading about, regardless of the risk. He began training in Zen meditation and then in Misogi, an arduous breathing exercise done in two-day sessions. When he returned to his doctors, all traces of pleurisy had disappeared.

In 1939, at the age of 19, Tohei met Morihei Ueshiba and became his student. In the short span of half a year he became the founder's representative (dairi) and, having yet to receive any official ranking in aikido, was sent to instruct at the Nakano Police Academy and the private school of Shumei Okawa. In September 1942, Tohei Sensei graduated from Keio University and entered the Toyohashi Officers Preparatory Academy. In February 1942, at 23, he was dispatched to a platoon near the Central China front. He realized through personal experience in battle that he must master calmness and relaxation. Tohei Sensei learned under fire the secret of directing ki and maintaining the one point in the lower abdomen. He gained important insight into his previous training and how it must be applied to daily life.

In August 1946 Tohei Sensei's platoon was demobilized from central China. He once more studied misogi and aikido while at Gokokuji in Otowa, Tokyo. He also studied Tempudo with Tempu Nakamura Sensei. Tempu Nakamura is credited as being the first to teach yoga in Japan. His teachings had a profound influence on Tohei Sensei. Nakamura talked about the importance of positive thinking and taught what he called mind and body unification (shin-shin toitsu do). Tohei Sensei saw that these ideas were fundamental to Aikido and incorporated them as he developed his own systematic way of teaching.

At 32 years of age, Tohei Sensei began to spread Ki Principles and aikido in Hawaii. He spread aikido throughout the US and helped establish schools on the east coast, west coast and in Chicago, as well as Hawaii. Tohei Sensei sent many instructors from Japan to the US to teach and lead schools. Between 1953 and 1971 he visited the United States on fifteen occasions, staying in the US for up to a year at a time.

Tohei Sensei teaching and demonstrating Aikido in the early 1960's

In 1983 Tohei Sensei established the Ki-Aikido Academy (Gakuin). This is a special two-year training program at Ki Aikido headquarters in Japan for both foreign and Japanese students. In October 1990, the 20th anniversary commemorating the founding of Ki Aikido International was held at the newly constructed Ki Aikido Headquarters complex, Ki no Sato, in Tochigi prefecture. He has recently opened the Ki Health Institute in Japan and created an "at-home" course in which students can become Ki Health graduates.

Tohei Sensei's travels abroad have been infrequent since 1971. He last visited the United States in 1998. In 2001 he announced that his son, Shinichi Tohei, would become the Director of Ki Aikido International. Tohei Sensei still teaches at World Camp, held annually at Ki no Sato in October. This training is open to all students.

Tohei Sensei is famous for teaching Ki to many well-known athletes, including Japanese baseball star Sadaharu Oh. He was recently the subject of a lengthy television documentary in Japan. Tohei Sensei has written many books on Ki Principles and Aikido including Ki in Daily Life, Ki no Iryoku ("Power of Ki"), Seiko no Hiketsu wa Ki ni ari ("The Key to Success is Ki") and others. His latest book is Ki ni ga Suru no Michi ("The Way to Union with Ki").
Koichi Tohei Sensei passed away on May 19, 2011 at 91 years of age ..